There are 3 species of Bahama hummingbirds. They are the Bahama Woodstar, the Inagua Woodstar and the Cuban Emerald.

The Bahama Woodstar (Callephlox evelynae) is the most common species living primarily in the Bahamas. This spectacular hummingbird can be seen around the Bahamas including the Turks and Calcos Islands. They tend to be less plentiful on the Grand Bahamas, Abaco and Andros Islands. This hummingbird species cannot be found on the Inagua Island. Interestingly, they have been spotted occasionally as a vagrant in Southern Florida, United States.

The Inagua Woodstar (Calliphox lyrura)is so similar to the Bahama Woodstar that it was, until recently, considered to be a subspecies. On account of its' slight differences in anatomy and courtship vocalizations and displays,today is considered to be a unique species found on the Inagua Islands.

The Cuban Emerald (Chlorastilbon ricordi) hummingbirds are found abundantly throughout the Andros, Abaco, and Grand Bahamas Islands. Actually, these small birds are aggressive enough to prevent the Bahama Woodstar to reside on these islands. The Cuban Emerald has been seen as a vagrant in South Florida, United States.

The male Bahama woodstar is a small hummingbird about 3.1 to 3.7 inches long. It weighs only 0.85 to 1.06 ounces. With green and gold backs, olive buff underparts, and white flanks (the sides located between the underside of the wings and the abdomen), these birds are strikingly attractive. The wings, extending about 2.5 inches,are brown. The fork shaped tail is blackish-purple. The gorget (throat) is bright purple with a white stripe. The long bills are slightly curved and the feet are black. 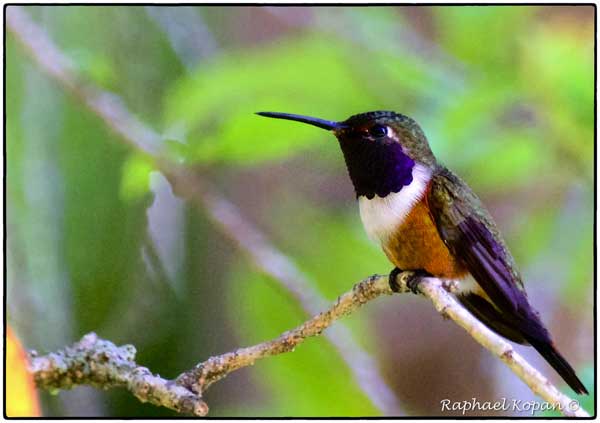 The female Bahama Woodstar, as often the case with hummingbirds,is plainer. Most distinctively, it lacks the stunning purple gorget. The flanks are a cinnamon brown color. The tale is more rounded with wider feathers. 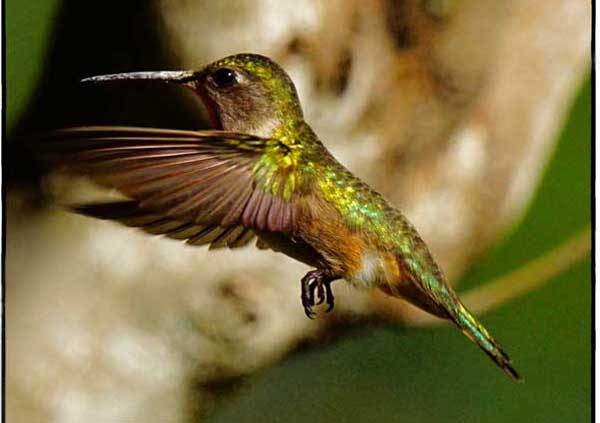 The Inagua Woodstar, as stated is similar to the Bahama Woodstar. The male is the same size, length, and weight. The gorget is also bright purple with a white stripe. This bird has similar green and gold backs, olive underbuffs, and white flanks. The wings are brown and the long bills are curved.

It is easy to understand why an ornithologist named James Peters formerly listed this hummingbird in the Check List of Birds of the World into the same species as the Bahama Woodstar.

Since then, differences have been noted and verified by scientists. Only the Inagua Woodstar has the fully iridescent crown. Most notably, it has the unique more lyre-shaped tail. Thus, it is now classified as "Calliphol lyrura" mainly because of the tail.

The female Inagua Woodstar lacks the purple gorget with the white stripe. Its flanks are cinnamon brown in color.

The Male Cuban Emerald is generally about 3.9 to 4.5 inches longs and weighs about.18 ounces.The attractve bird is iridescent green with some bluish feathers on its breast.It has a whitish spot behind the eyes. The Cuban Emerald has a short bill with a black upper tip.The tail is deeply forked. 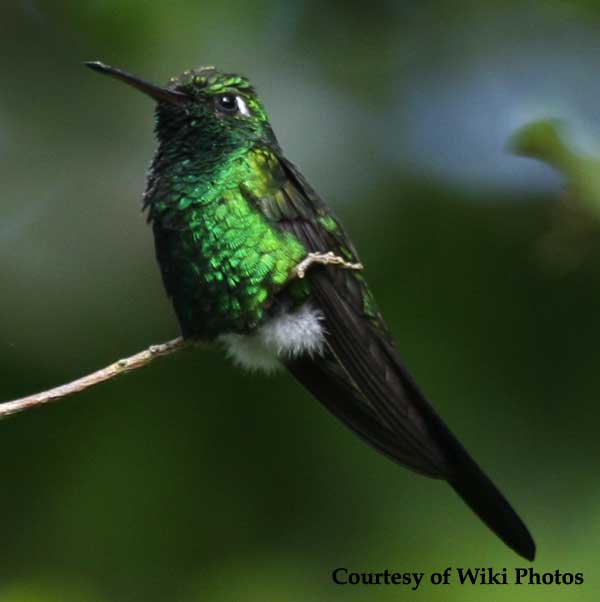 The female Cuban Emerald differs from the male because of its' grey plumage on the throat. The breast is also largely grey. She shares the whitish spot behind the eyes which helps us to identify her. Her tail is less forked than the male. 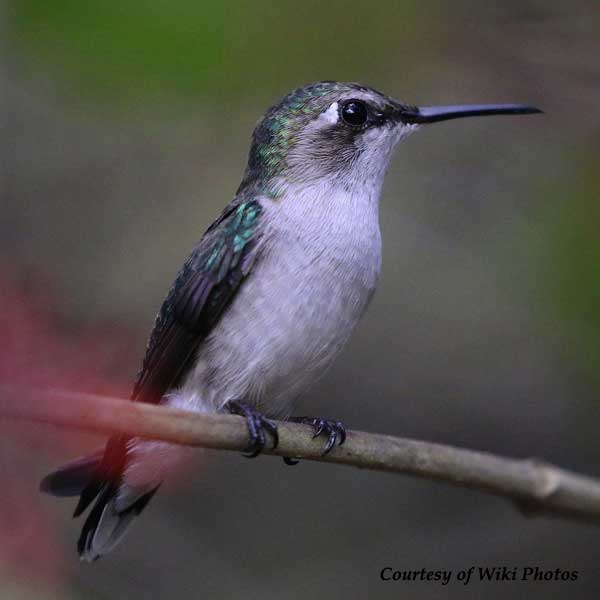 All 3 Bahamas hummingbirds enjoy the nectar from the lush blooms growing abundantly in the Bahamas. They particularly feast on flowers with a tubular shape because these blooms usually have the high nectar count necessary for hummingbirds.

The Bahama Woodstar, the Inague Woodstar, and the Cuban Emerald partake in nectar from hummingbird feeders provided by locals and in parks such as the Inagua National Park.

All hummingbirds need to eat insects for protein and Bahamas hummingbirds are no exception. All the hummingbirds of the Bahamas, like all wild birds, need water for drinking and bathing.

The male hummingbird is responsible for finding a good feeding territory with nectar, insects and a reliable water source

The female hummingbirds, as in all hummingbird species, chooses her mates. The males fly in a U shaped dance to initially attract the female. After mating, the male and female go separate ways.

The female Bahamas hummingbirds build a nest of plant fibers and animal hairs alone with no help from the male. She usually lays 2 eggs which she incubates for a few weeks. For more information about hummingbird nesting and baby hummingbirds read this.

The Bahama Woodstar makes a distinct hummingbird sound while it is feeding. For this reason, it has been named "The Hummer" by the locals. It also makes a different metallic sound with its' tail during courtship display flights.

It was partially through the study of the vocalizations of both birds that scientists were able to conclude that the Inagua Woodstar is indeed its' own species.

"The Discovery of a New Species"! 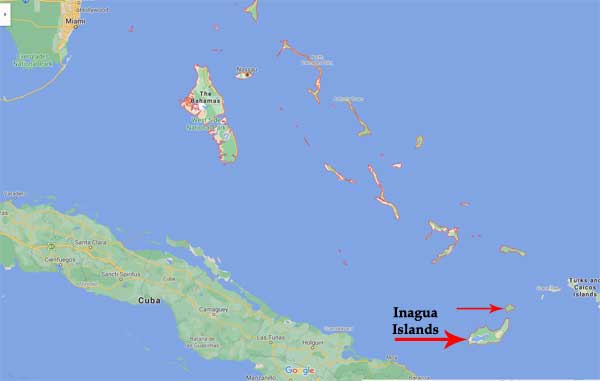 The Inagua Woodstar is found only on the Inagua Islands, in the southern end of the District of the Bahamas.

Here is the very interesting paper that was submitted in 2015; A result of studying the morphology, calls, song, mechanical sounds and genetics of the Inagua Woodstar.