Purple Beauty of the Desert

Origin of it's name

The Costa's hummingbird, remarkably adapted to live in the desert, was not named because of it's uncommon habitat or the spectacular purple gorget. Instead, it was named after the French nobleman and naturalist Louis Marie Pantaleon Costa.

How to identify a Costa's Hummingbird

Adult Male - It looks like the villain in an old cartoon, having a metallic purple to violet gorget with elongated corners that makes it appear to have a mustache. Additionally, this bird looks like it is wearing a vest because of the green sides of the breast with a white mid-line stripe. Indeed if this hummingbird resembles a villain, it is quite a handsome one at that. 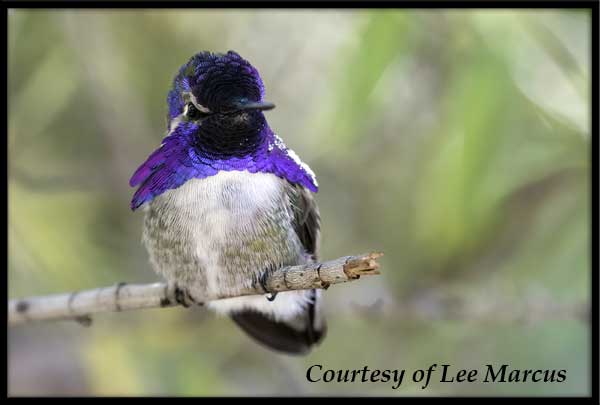 Adult Female - This pretty lady is green to golden green. The gorget is unmarked at times or possibly has a small patch of metallic violet. The tail feathers are rounded.The bill is short, thin and slightly curved.

Immature Male - It is similar to the female but has a gorget that extends downwards at the corners. By summer, it starts to show patches of metallic purple. 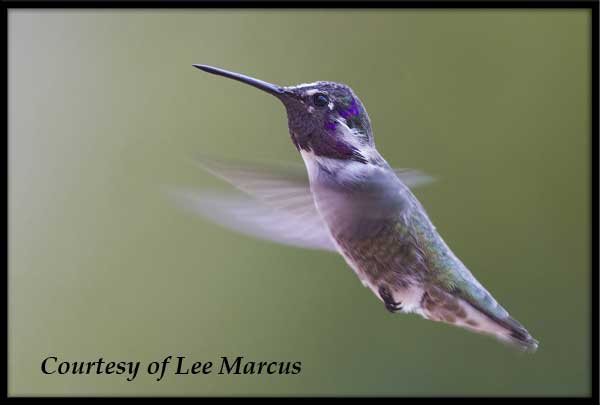 Immature Female - It is similar to the adult female but the feathers are duller and fluffier.  The tale has a small white tip

Depending on time of year, Costa's can be found in the deserts, the coastal scrub, chaparral, woodlands, meadows, gardens and backyards of California and Arizona. We should note that they have been known to occasionally wander in other areas toward the East and north as far as Alaska and Canada. A great deal is not known about these wanderings, which are being studied.

Getting Chilly Out Here

All hummingbirds have a super-fast metabolism and can die quickly if their body temperature isn’t maintained. In the desert at night, the temperatures sometimes dip low. What happens to the tiny hummingbird at this time? They have a special adaptation called Torpor, a semi hibernation-like state which allows the body temperature to reduce and the heart rate to slow to 50 beats per minute. Normal heartbeat is 500 to 900 beats per minute. Slowing down their metabolism in this way allows these birds to survive the cold nights. 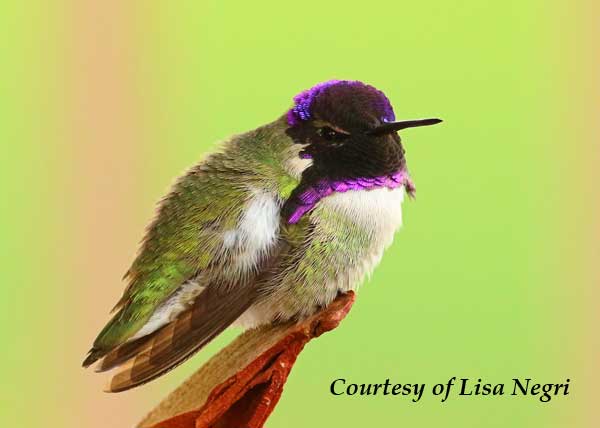 Its’ A Short Trip

The bird has the shortest migration of any North American hummingbird. It leaves its desert habitat in peak summer as the temperatures rise becoming too hot and nectar sources from flowers become scarce. This hummingbird only migrates to the meadows, woodlands, chaparral and coastal scrubs of California, Arizona and Mexico. Generally the migration back to the desert begins in early January.
Note: Today many Costa's remain year-round in the gardens and properties of people supplying feeders and water.

Costa's start breeding in the low elevation desert of southern California and southern to southwestern Arizonian between February and April. The males arrive first defending large territories as much as several acres where plant nectar is sometimes scarce. Having an unusual breeding courtship, the male flexes his mantle until his glowing metallic face resembles a baby octopus. With this persona, the male flies high then it zooms down again making a high pitched whistle during the dive. People who spend time in the dessert clearly here this eerie and distinct sound.

Breeding Fact: In rare instances, Costa's will breed with the Anna's, Black-chinned, or the Broad-tailed hummingbirds, creating hybrid hummingbirds!

The female builds the nest alone. Spider webbing binds together the plant down she uses. The small cup shaped nest of the Costa's sometimes hidden in the desert Yucca Plant is only 1-2 mm and situated 3 to 6 feet above the ground. An interesting fact about this hummingbird is that she lays the 1st egg two days after the nest is built. She waits two more days before laying the 2nd egg. Incubation usually takes 15 to 18 days. After hatching, the chicks grow and develop for approximately 20 to 30 days before leaving the nest.

Adaptation Fact: Amazingly, the mother Costa's can survive without water throughout the nesting period! 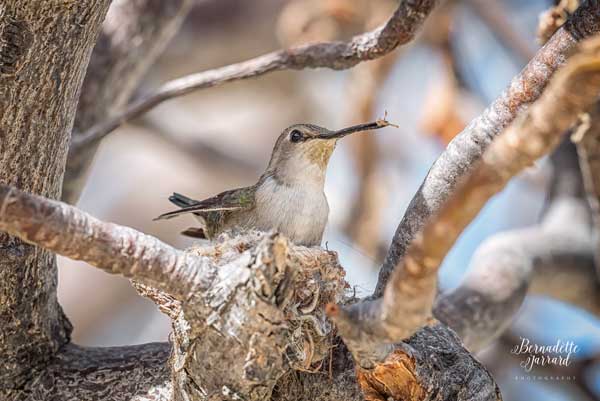 The Costa's are rivals of the Anna’s hummingbirds and often fight with them over territory during the none-breeding season. It is the larger Anna’s that usually wins these territory disputes.

Snakes and other birds are predators of the Costa's hummingbirds.

The Conservation Status of the Costa's hummingbird is "Least Concern" in the United States. However, it is on decline due to some threats of urbanization and agricultural expansion in California and Arizona. The loss of coastal "Sonora Desert Scrub" is a primary concern because this area is host to their nesting season. Nonetheless, some of these miniature hummingbirds are finding habitat in backyard feeders. They are appreciating the feeders and flowers provided for them in yards and properties.