Our Nest Box Video 2015 is a collection of photos and videos captured from our live streaming bird cam from the Spring of 2015. A pair of Black-capped Chickadees claimed a nest box in our yard to set up a home to raise a brood of 6 chicks.

Go inside the nest box!

Witness the excitement from the very beginning of nest building, laying eggs, eggs hatching, feeding and the final days before the chicks fledge the nest.

We use the "Hawk Eye HD Nature Cam" for our live streaming. 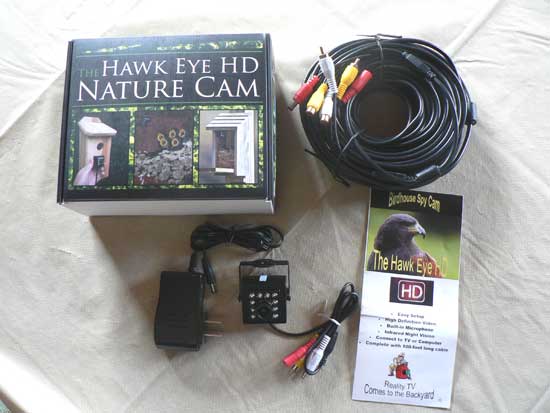 Chickadees will build 3 to 5 nests before they decide on a home. So, we have been lucky that our bird nest box has been chosen by this pair. She will lay 6 to 8 eggs and incubation will last from 11 to 14 days before they hatch. Incubation is by the female only and will be fed by her partner, the male Chickadee.

Once hatched, the brood will be fed by both male and female birds for approximately 14 to 20 days. After this, the youngsters will fledge the nest but will still be fed by their parents for several weeks until completely self-sufficient.

I am particularly fond of the Black-capped Chickadees who are very curious and friendly. 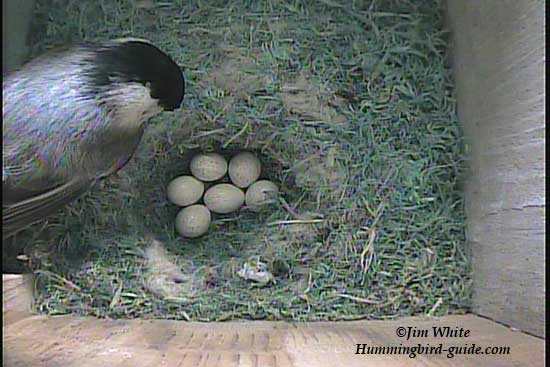 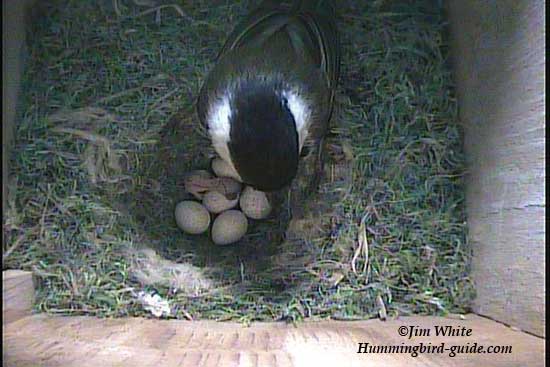 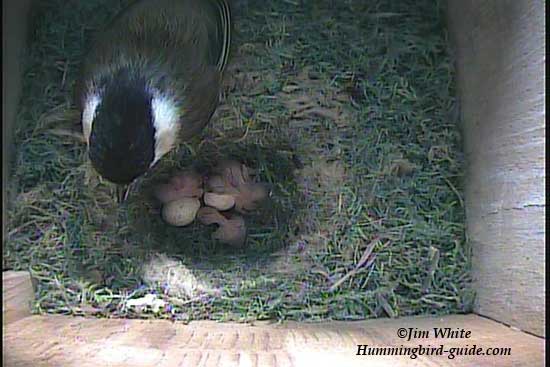 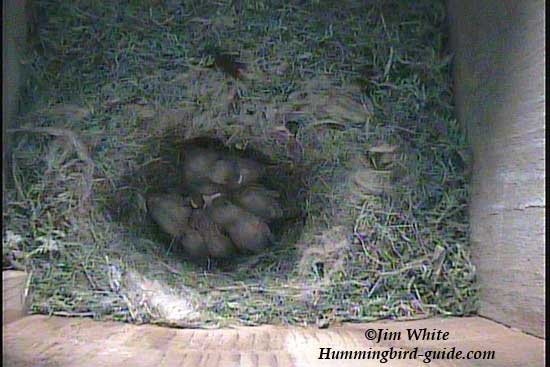 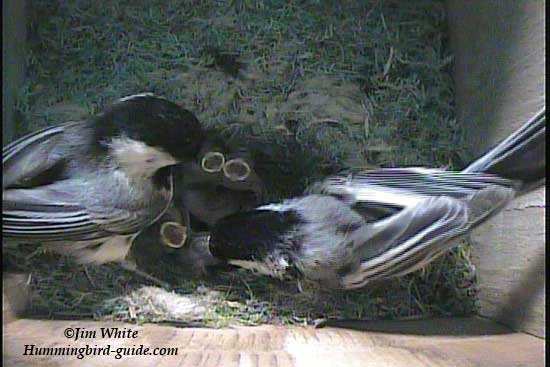 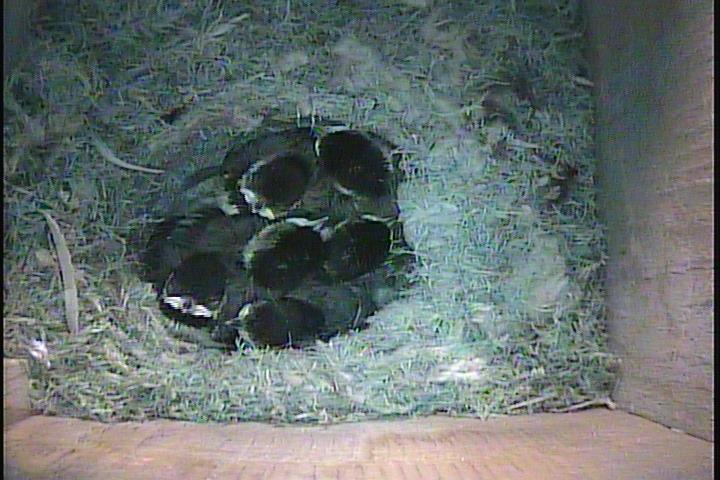 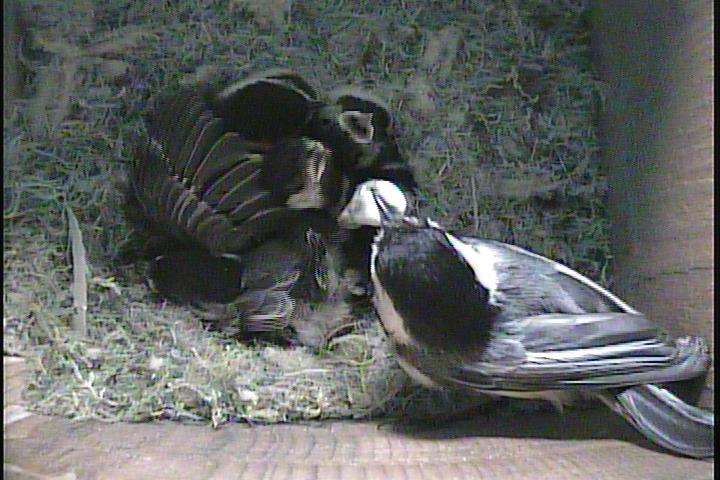 OBSERVATIONS: We noticed the first chick hatched at 6:58 AM on May 27th and momma Chickadee ate the shell after the chick hatched and sat back on the nest to keep the newly hatched chick warm. At 7:40 AM the male partner entered the box and fed a small green grub/worm to the female and exited the box. At 7:45 the female left the box and returned at 7:50 for the first feeding of the new born chick by dropping food into the chicks open mouth.

The second chick hatched at 8:13 AM. The third chick hatched at 10:27 AM. A short while after, the female perched at the entrance whole with her head sticking out of the whole and the male delivered some food to her. She then went down onto the nest and fed one of the chicks.

She continues to sit on the nest to incubate the remaining eggs and keep the chicks warm.

The last two chicks hatched overnight and the female sits on the nest to keep the chicks warm in the cool morning and leaves the nest box briefly to gather food for them.

Feeding intervals are increasing by the third day and both male and female Chickadees take part, both bringing food for the brood. The female ingests the chicks excrement (which is in a sack), when it is passed by the chicks. The feeding is constant throughout the day. Sometimes the male comes to the entrance hole to pass food to the female for the feeding and other times she will leave the bird box to gather food herself for the chicks.

On the fourth day, the dark stripes can be seen on the chicks.

On the fifth day, feeding is constant by both the male and female. The female sits on the chicks to keep them warm. The chicks are starting to form their wings.

On the seventh day both male and female are feeding the brood more frequently. Feathers are more visible, especially on top of their heads. They appear darker in color as  more feathers form and grow. Their wings are noticeably growing each day.

After feeding a chick he/she will almost immediately stick their butt/rear up in the air and pass a sack of excrement which the adult plucks and removes from the nest. These sacks have been referred to as bird "diapers"!

At 13 days old, the chicks are venturing out of the center of the nest once in a while to the surrounding edges of the nest. Their eyes are noticeable now and you can see the chicks blinking. They started spreading their wings in the afternoon.

At 14 days old, the chicks are frequently "flapping" their wings strengthening their wing muscles for their 1st flight. My guess is that they will fledge today or tomorrow.

At 15 days old, the chicks have lost all baby feathers/down. They look like the adults except in size.

At 16 days old, the chicks are cuddled together in the cavity/pocket of the nest as of 7:00 AM.

At 17 days old, the chicks are staying close to the front side of the box below the entrance hole.

At 18 days old, the chicks are almost as large as the adults. I would think they would fledged the nest by today.

If you would like to observe your own bit of nature and maybe if you are so fortunate, find and stream a hummingbird nest, we have the this camera available in our store. Click the link below to learn more about the camera. 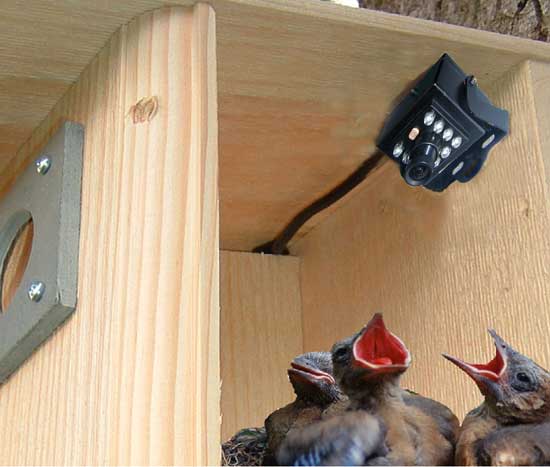 The camera used for our streaming is a "Hawk Eye HD Nature Camera". I will be doing a review of the camera in the future for those who are interested.