Gem of the East

United States -  from Minnesota, Iowa, central Kansas, Oklahoma and Eastern Texas east to all the states on the Atlantic.

Most Ruby-throated hummingbirds spend their winters in Mexico and Central America. Some, however, inhabit Florida, Florida Keys, Georgia, and the Gulf Coast of Louisiana and Texas all year long. In recent years there have been an increasing number of wintering hummingbird sightings in other southern states. It is unclear if these Ruby-throated hummingbirds are learning to adapt to changing climate conditions or are genetically different from those that migrate. 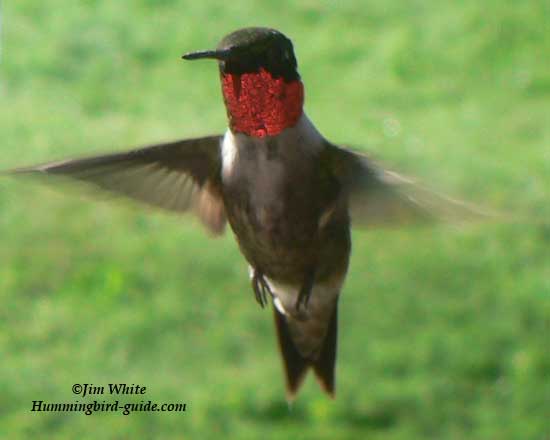 Length: One of the most endearing qualities of our Ruby-throated hummingbird is its’ small and compact size of only 3 ¾ inches (An interesting fact-This hummingbird is the smallest except for the Bee hummingbird.

Wingspan: Only 4 ½ inches but we can note that the wingspan of the female is slightly larger than that of the male.

Adult male - Our exquisite Ruby-throated hummingbird is famous for its iridescent feathers. If you look at a male without any reflection from the sunlight, its feathers will look black. This is because they do not contain the pigments of color. In the sun, they reflect the light and we see that the gorget (throat) is ruby red bordered by a narrow band of black. To add to the beauty, a white breast extends around the sides of the neck and contrasts with the white gorget. All this is set off with a lovely metallic green back and wouldn’t you know a green head crown. What a prince!

Only the male has a radiant ruby red throat (gorget).

Adult female: The female beauty lacks any red gorget and there might be some dusky color on the throat. Its back is basically bright green. The sides are a kind of grey-green.

The female has a dull white throat and a white rounded tail.

Immature male: We always notice how much smaller they are. An immature male resembles an adult female with a shorter bill. (These young hummingbirds are definitely more  friendly to humans. We marvel at their innocence as they fly in front of our windows asking for us to fill the feeders. They really do act a bit like children.)

Immature female: Again this bird is smaller than the adult female but does resemble one.

We welcome our Ruby-throated hummingbirds in our backyards at our flowers and feeders. For this reason, we often forget they are woodland birds that can found in our forests. Whether in our yards or in the woods, these birds require a nectar source, a water source, and insects such as aphids, caterpillars, and mosquitoes. In winter most migrate to South and Central America for a suitable food source and climate. We are always sad to see them leave and wishing them a safe journey.

Migration and Breeding Range map of the
Ruby-throated Hummingbird. 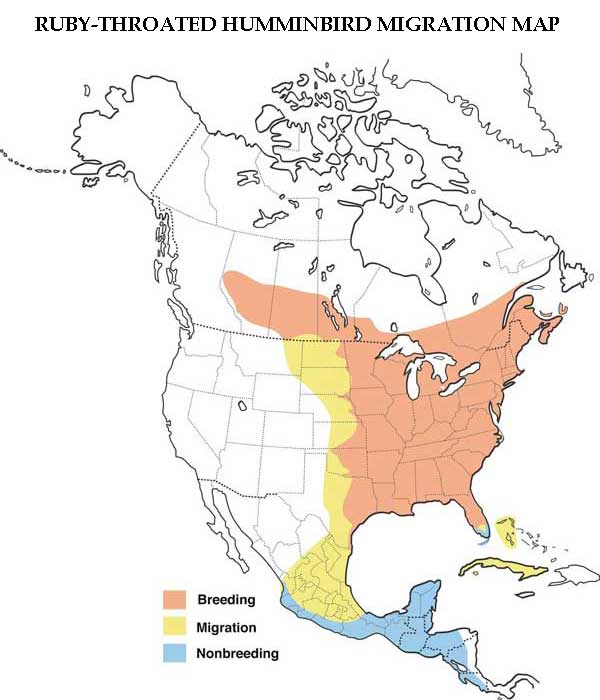