The Rufous Hummingbird breeds farther north than any hummingbird.
It breeds in the Northwest from Northern California, Oregon, Washington, Idaho, Montana, British Columbia and into Southern Alaska.
The Rufous has occasionally been spotted as a migrant hummingbird near the eastern coastline of the United States.

Do you think you have seen one? As it turns out, if you reside in just about any state in the Unites States or any providence of southern Canada, this is possible. The Rufous hummingbird does breed farther north than any hummingbird. Along with the Anna’s, it is true that it is one of the most common species of hummingbirds along the California coast. In the Fall, it is commonly seen as a migrant in the Rocky Mountains from Colorado south through Arizona.

Here is where we think this bird gets even more interesting. As a migrant, the Rufous has been spotted across southern Canada and in several northern states such as Illinois and Michigan. Traveling across Canada first, these vagrant birds are then believed to travel south along the Atlantic coast and have been seen from Vermont to Florida. (Jim and I keep our feeders out for a few extra weeks in the Autumn in the hopes of a sighting ) If you live in a central state you also may see one, because they have been occasionally seen here.

Sounds of the Rufous Hummingbird:

Identification (Adult Male): The back is rufous(reddish) with numerous green scatters. The shoulders are green. The under-parts are white with some rufous. The crown is bright green and it has a brilliant scarlet gorget (throat) that can look golden if the light reflects at a good angle. The bill is medium size and straight. The tail is long and pointed and projects well beyond the wing tips when perched. 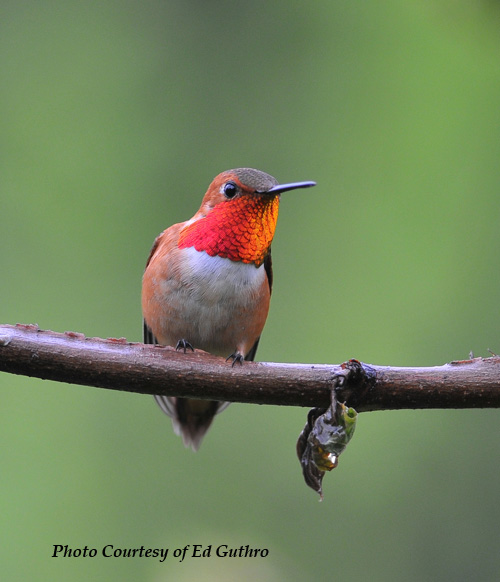 Identification (Adult Female): The back is bright green with underparts that are white with rufous(reddish) on the sides. The face is a dusky color and the throat is whitish and heavily marked with green to bronze. The tail shows an indentation near the tip.

Please note: The adult female is almost indistinguishable from an immature Allen’s hummingbird. The difference is that the Rufous hummingbird has a broader tail with a notched tip that is hard to spot in the field.

Identification (Immature Male): Smaller than the adult male, it looks like the adult female. You can identify it by the gorget which is marked with some rufous. This is unlike the plain throat of the adult female.

Identification (Immature Female): Smaller but it looks like an adult female. The throat is usually white and unmarked or only lightly marked. The tail is broader with less rufous color. 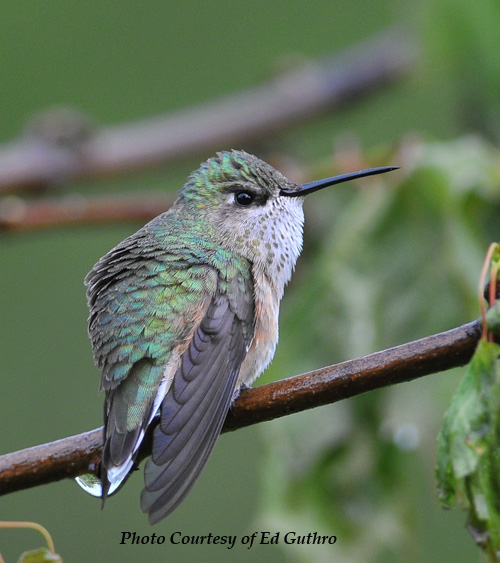 Sounds: The call is a high pitched, buzzy sound. It would resemble “dzizzt”.

Behavior:Being the most aggressive hummingbirds, they regularly displace other species from territories.

Breeding: Mating takes place between April and July depending on location.

The nests are made from downy plant fibers, moss, lichens and will contain two white eggs. The female builds the nest and raises her babies alone without help from the male. They may nest in loose colonies.

This species breeds as far north as Alaska. In our opinion the adaptation that has allowed them to nest in these colder locations is remarkable. When the mother hummingbird goes foraging for food, sometimes only for short periods of time, the egg temperature drops and this delays the hatching.

When the weather is especially cold, the female will go into a temporary  hibernation-like state called Torpor. Torpor enables the mother hummingbird and her eggs to live but also lowers the body temperature of the hummingbird. As a result, the temperature of the eggs drops and hatching is delayed.

Migration: In relation to its body length, the Rufous has the longest migration trip of any bird in the world.
Some travel from as far north as Alaska to its winter home in Mexico.

Locations: Habitat is predominately in the Northwest from Northern California, Oregon, Washington, Idaho, Montana, British Columbia and into Southern Alaska.
However, they are a migrant bird and will be found in other parts of North America.
These birds are found primarily at backyard feeders and nectar rich flowers.