The Allen’s Hummingbird is a small, compact hummingbird only 3 to 3.5 inches in length residing primarily in California and southern Oregon. This western hummingbird has the earliest spring migration of any North American hummingbird starting the Spring trip from Mexico in December. They can be hard to distinguish from another common California hummingbird, the Rufous.

A fantastic series of videos of a female Allen's Hummingbird from building her nest to the day the chicks fledge.

Generously contributed by Michael Pazzani for us all to enjoy!

Characteristics for Identification of Allen’s Hummingbird:

Adult Male: The back is brilliant green. His crown is bright green. Its cheeks, eyebrows, rump and undertail are all rufous color. The underparts are white but you will notice a rufous “vest.” Even though the gorget (throat) is a brilliant orange-red, it might look golden or golden green from some angles. This species has a straight medium length bill. A specially adapted long pointed black tipped rufous tail can make a whiny sound during flight. 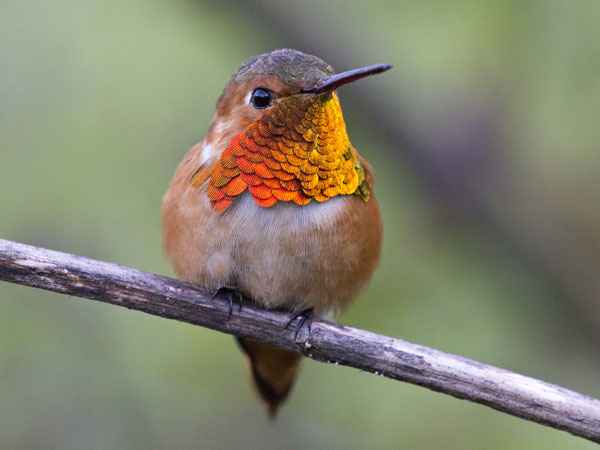 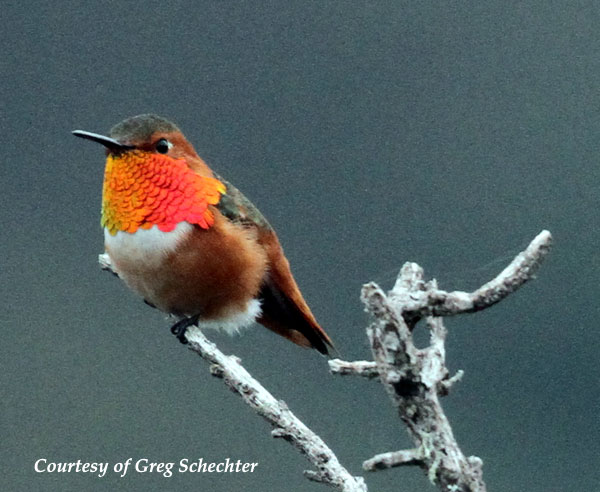 Adult Female: She is so similar to the Rufous Hummingbird that it is difficult to distinguish one from the other in the field. Her back is bright green. The face is rufous. Its gorget is white and speckled with  green and bronze feathers. Her underparts are white and rufous. The tail is quite long and rounded extending well beyond the wings. 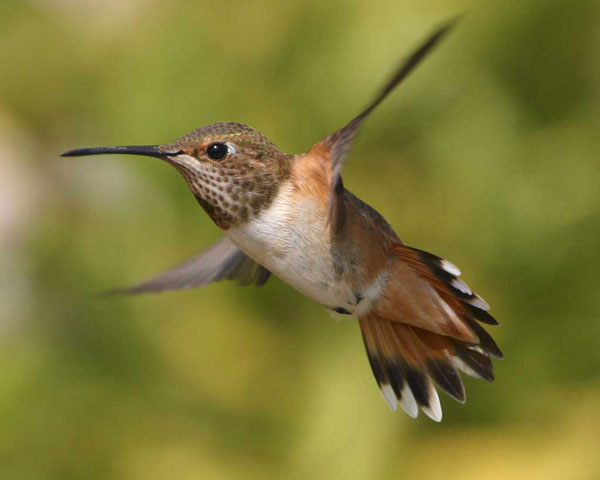 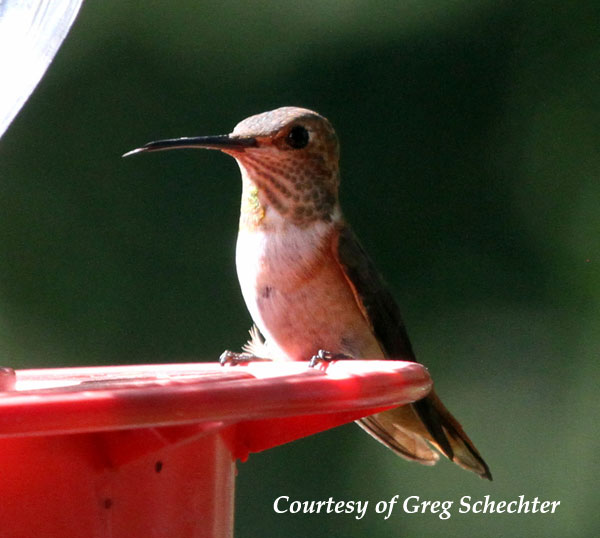 Immature Allen’s Male: He resembles the adult female. He does have the same narrow outer tail feathers. One difference is that the gorget has large feathers in noticeable patches.

Immature Allen’s Female: She is similar to the adult female except for having fewer gorget markings. In fact, the center of her throat is white. She has  broader outer tail feathers that have white tips.

Habitat: They breed along the coast of California and southern Oregon preferring edges of coastal forest, brushlands, and chaparral. Since they do have the most limited breeding and wintering range of any North American hummingbird, the population is declining. Even so,they are still considered Least Concern on the Conservation listing. However, they have been included in the 2014 State of the Birds Report because there is some worry about the dwindling numbers of this species.
Note: Just off the southern coast of California, on the Channel Islands there are a slightly larger Allen’s sub-species. Some of these birds also live on the mainland. All live year round, they over-winter and do not migrate.
Note: The Allen’s have been spotted (though rarely) along the Gulf coast States

Some tips for Backyard Hummingbird Enthusiasts:
If you live within the Allen’s range, you can enjoy them at your hummingbird feeders. Just provide homemade nectar without red dye and possibly plant some flowers. All hummingbird need water besides nectar especially during the nesting season. 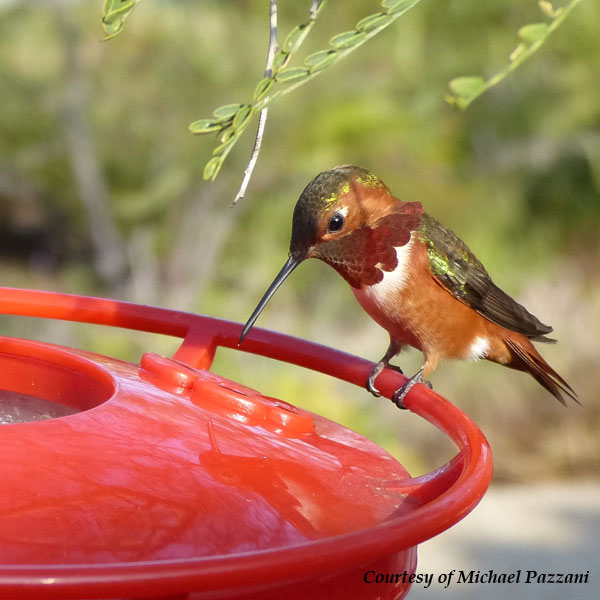 Behavior: Migration of the Allen’s: Most do migrate in the early spring from Mexico along the California coast as far as southern Oregon. In order to take advantage of the flowering blooms at this time of year, the Fall migration journey is more inland. As with most hummingbirds, the males migrate first. A prelude to spring in California is seeing the Allen’s hummingbird.

Mating: Males defend their territory by perching on a twig or a branch with a good view. They aggressively chase out any intruders. Besides other Allen’s, these hummingbirds will not only fight larger hummingbirds such as Anna’s but also hawks and the American kestrels. You guessed it, the Allen’s usually win. Once territory is established, the males often make circular flights around them. This is how they announce their territories to the females who arrive later. Learn more about hummingbird mating.

Spectacular Mating Display: During courtship, the male rises about 25 feet on either side of a U shape. At the top, he shakes its wings making a high pitched sound. He does this several times. Then majestically, he flies 75 to 100 feet in the air and with a slow spiral dives down.

Nesting: Like most hummingbird species, the female builds the nest alone. The nests are bigger than many other hummingbird species. They are made out of Moss, plant down, spider silk, lichens, dried leaves, dog hair, or feathers. They are usually placed between several inches to 50 feet above ground. Low vines, low tree branches, wild blackberry bushes and ferns are sometimes used as a lower nest site.  The female then lays 2 white eggs and has 1 or 2 broods per year. She incubates her eggs for an average of 17 days. Once hatched, the female feeds her chicks alone with no help from the male.

Here is a series of videos of a Female Allen's Hummingbird building her nest, incubating the eggs, feeding her chicks, baby flapping it's wings, and finally one of the chicks fledge the nest courtesy of
Michael Pazzani: 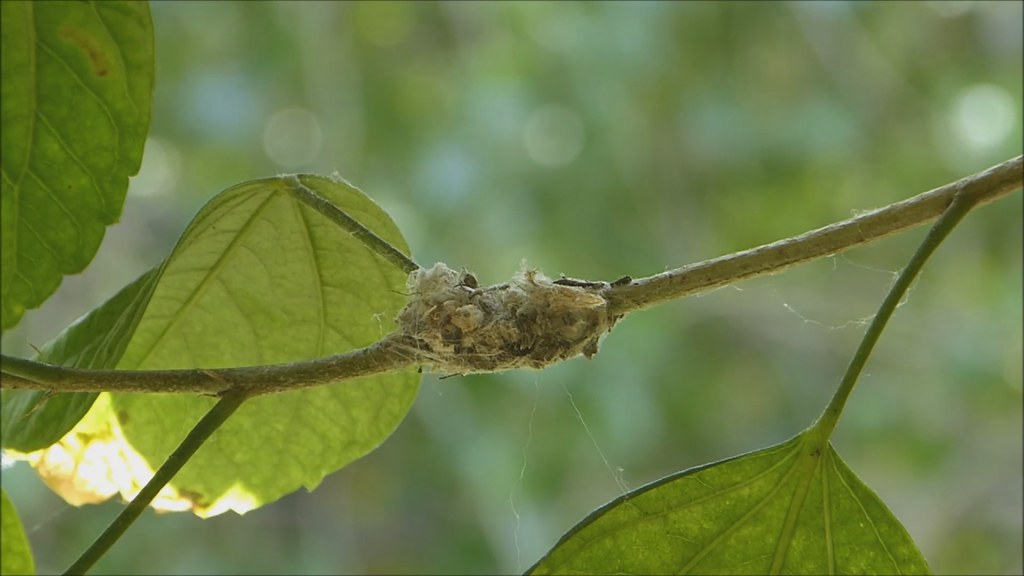 The Female Building Her Nest. 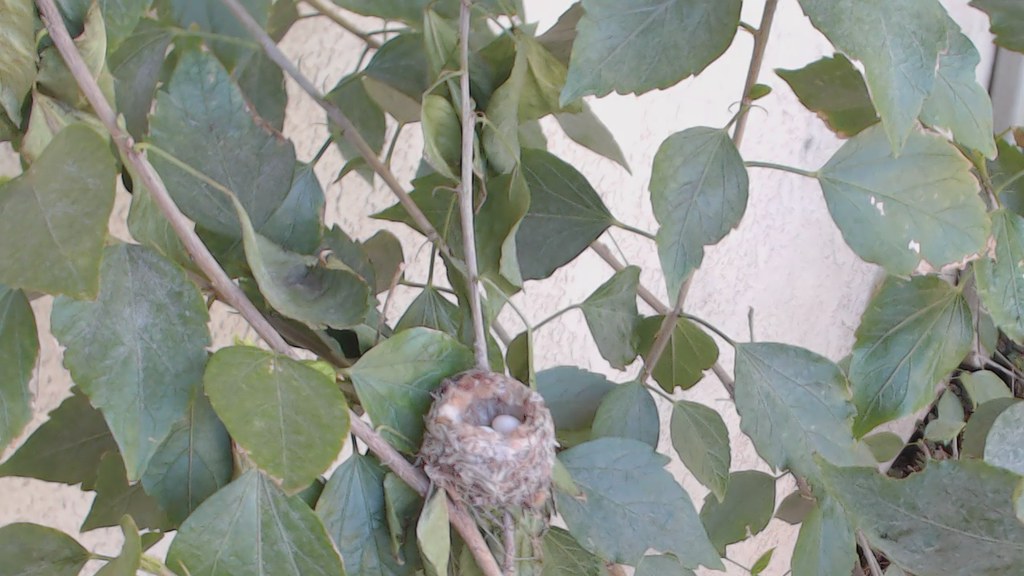 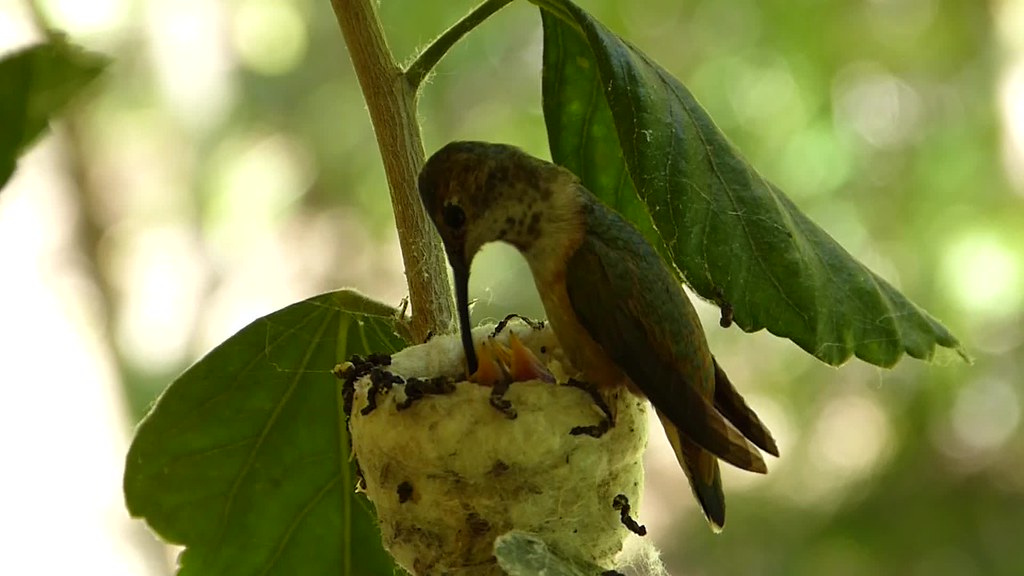 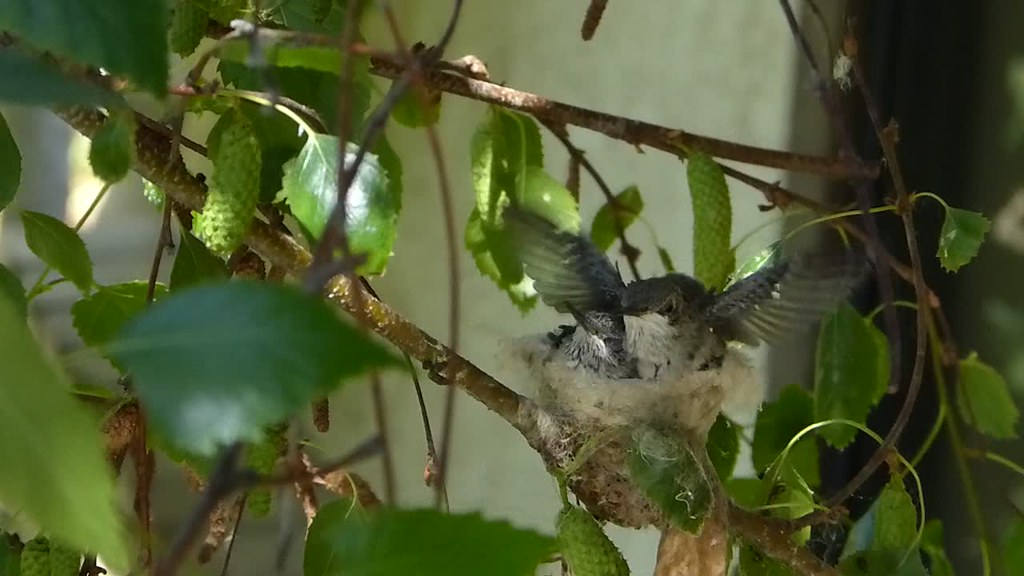 A Chick Flapping; Getting Ready To Fledge the Nest 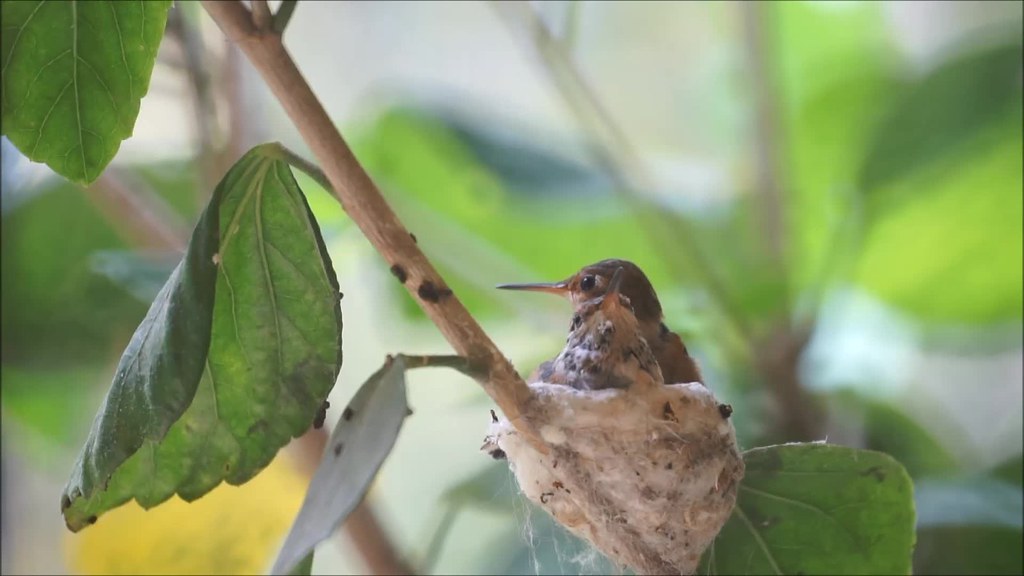 One Of The Chicks Leaves The Nest 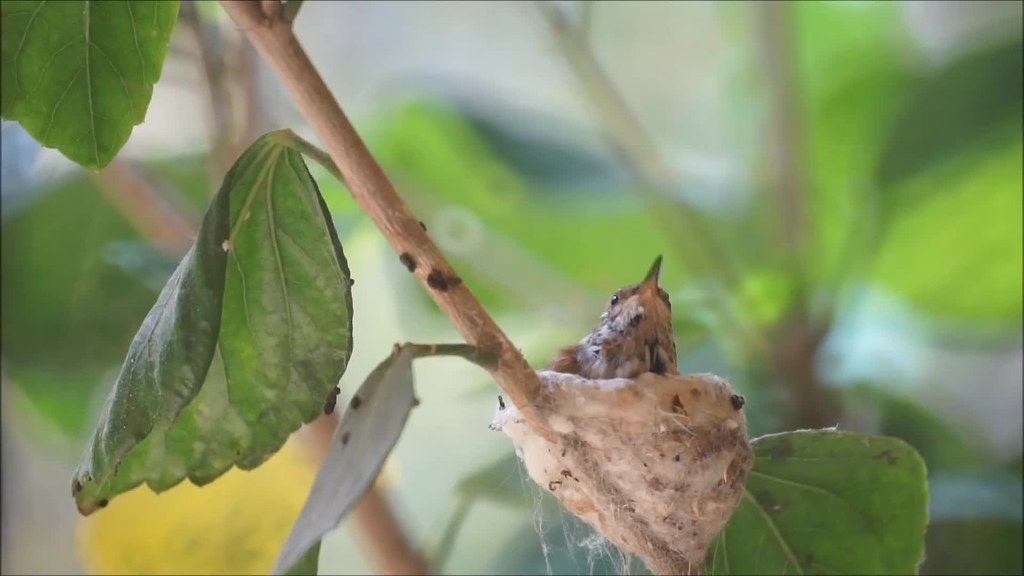 The Second Chick Fledges The Nest 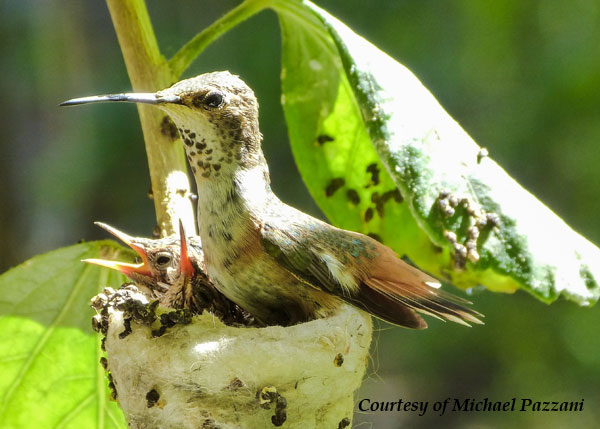 Female Allen's Hummingbird in her nest. 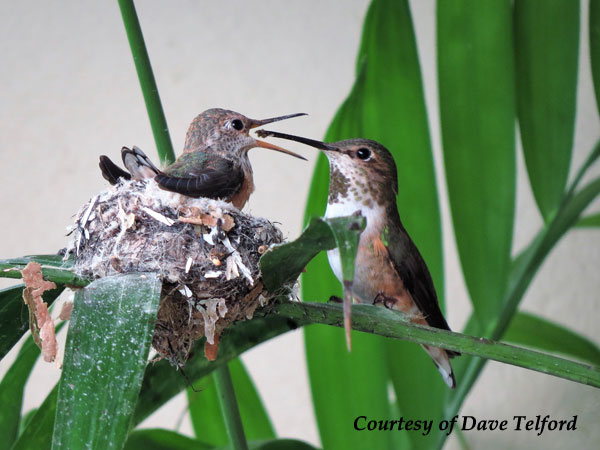 Sounds: The call is a 3 part buzzing sound. During the mating display the tail feathers of this bird make a loud shriek.