When to Stop Feeding Hummingbirds?

We are asked two basic questions in regard to when should we cease feeding our little friends.

Saying Goodbye in the Autumn!

In the Autumn we recommend leaving your feeders up for approximately two (2) weeks after you have seen the last hummingbird. There might be one or a few travelers migrating in need of a stop-over meal. They might stay for one day or several. Yes, this is a commitment because the nectar needs to be changed every 3 to 5 days even if the feeder has not been visited. In the event that a hungry passerby might stop to feed, we wouldn’t like to sicken the bird.

It should be noted that more and more people are seeing some species of overwintering hummingbirds in southern and northwestern states along with some provinces of Canada.

If you are interested in the possibility of having one stop at your location, don't stop feeding hummingbirds. Keep your feeders up until early November. These hummingbirds such as the Rufous are more cold tolerant but require a greater commitment from you. If you are surprised with one, you might need to keep your nectar warm for them. 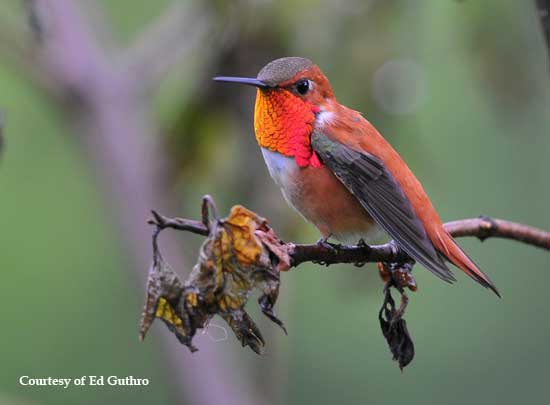 Here is an experience sent to us by our friend Donnie Green in Alabama:

I would like you to urge people to leave a feeder or 2 up year round. You may get a "winter hummer" as we did 5 years ago. I live in the south, the middle of the state of Alabama. I have kept feeders up year round for the last 10 years. Usually 3 feeders. If it is going to freeze, and we don't get too many freezing days here in the south, I will rig up a brooder light over the feeders. Same kind that is used for baby chicks. It keeps the air warm around the feeders and keeps them from freezing. We had our first and only winter hummer 5 years ago. It showed up November 31st and stayed thru December 16th. We saw him everyday but one. I contacted the late Bob Sargent and sent him photos of our bird. Bob and his wife Martha are hummer experts and capture and band winter hummers all along the south. Bob and Martha showed up at my home 3 days later with a cage and a banding kit. We removed all feeders but one and put it in the trap cage. The hummer flew around it awhile but eventually went inside and Bob released the trap door that he was holding open with fishing line. He sat the cage on a little table and reached in and grasped the little hummer. He immediately went to examining the bird. He said we had a 6 month old Rufus hummingbird that had migrated from the northwest, probably from Alaska, Oregon or Washington. It's amazing that this bird had flown over 2000 miles and ending up in my yard in Calera, Alabama. Bob banded the hummer and logged all info, weight, size, etc... My wife who was so excited got to hold the hummer and release him back to the skies. He did return and stayed with us thru December 16th. Then he was just gone. We saw him everyday but one. My wife named him Christmas and said Christmas had come early. We were sad when he left but we hoped he flew into another person's life and made their day. I urge everyone to keep a feeder or 2 out because you never know. You may be blessed with that winter hummer. We haven't had another since that time but I keep hoping and praying for another winter bird. Its so exciting. We are patiently awaiting our spring arrivals that usually show up the last week in March. We cant wait.
Donnie Green

There is a widespread myth that they won’t migrate if you don’t take down your feeders in time.

Thank goodness, this myth is not true. That’s a lot of pressure for the average birdwatchers who want only the best for their loyal little friends.

I remember the first I heard this and nearly panicked!
What if I hadn’t taken down my feeders in time and my fragile hummingbirds that live on the edge of survival stay and freeze in our cold northeastern climate?

So I did my research to learn the science behind the hummingbird migration.

A Myth is a myth!

Scientists have studied the hummingbird in regard to migration.
They have banded many hummingbirds and tracked their marvelous migrations.

As a result, we now know scientifically that hummingbirds do not migrate because of a lack of nectar or we stop feeding hummingbirds.
It is the length of daylight in autumn and spring that triggers the hormones that cause hummingbirds to migrate.

When the hormones surge, the birds become restless.
In addition, they start to become nocturnal because hummingbirds migrate at night.

Finally, when the length of day shortens even more the hormonal surge becomes greater and our dear hummingbird friends leave us.

A Myth Based on Fact!

When observation was the only method of understanding hummingbirds, the myth that hummingbirds leave because of lack of food had substantial merit.

It is true that once in a while a hummingbird does not migrate.

We now realize that this is due to a defect in its’ endocrine system and has nothing to do with leaving up your feeder.

Upon seeing such a hummingbird, sometimes caring people attempt a rescue either by keeping a feeder warm or calling an organization that specializes in bird rescues.

Please note that there are exceptions to hummingbird migration:

If you reside here there is no concern when to stop feeding hummingbirds and you should consider yourself fortunate.

We love our hummingbirds almost as pets. They return to us each year and add so much enjoyment to our lives.  Yet, while they do depend on us for nectar, hummingbirds are wild birds that can survive without us.

Most people vacation during the summer months when there is an abundance of nectar producing flowers both cultivated and wild. However, please consider the nectar if you are leaving for more than a few days. Empty your feeders and clean them thoroughly before you go. Nectar left in the feeders can become rancid quickly especially in the sun which can harm hummingbirds.

Another option, if you have several feeders out and a lot of hummingbirds is to empty half of the feeders. This way you can be sure that the remaining feeders will empty more quickly.

Of course, if you feel that you cannot leave your precious little friends without an easy source of nectar you can ask a friend or relative to fill and clean them for you. We know people who have done this and weren’t surprised when the helper became a hummingbird enthusiast themselves after the experience. We all know how wonderful these birds can be. So a thank you gift of a nice hummingbird feeder is never a bad idea. In any event, have a good vacation and don’t worry about your hummingbirds.